← Questioning Our Protestant Tradition of Sola Scriptura
New Year’s Resolutions We Can All Keep! →

Are the Catholic, Orthodox and Protestant Views on How One is Saved Actually That Different? 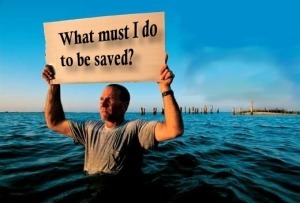 I am beginning to think that there is less disagreement between the Protestant view and the Catholic / Orthodox view on salvation than we realize.

The misunderstanding is a result of how each part of the church defines “salvation.”

When a Protestant talks about “being saved”, “getting saved”, “accepting Christ” or any other number of terms we use for this, we are primarily referring to the idea of forgiveness of sins. Our sins are forgiven when we “come to Christ”. We have been ‘saved” from sins eternal penalty.  We can not earn this forgiveness of sins, it is a merciful free gift from God and we resist anything that makes it look like it must be earned.

In this sense Salvation IS an event, we have been forgiven of our sins!  However, it doesn’t end there does it?   The Christian life simply begins with this forgiveness and new birth. The next phase is what we Protestants call sanctification and it is a life-long process, not an event. Sanctification is the process of living out the Christian faith and becoming more and more like Christ. It involves choices and actions and a modification of behavior. Few Protestant theologians would separate these two things from the Christian life, though they do divide them into two categories: Salvation and Sanctification. To be a Christian, to live the life of a follower of Christ, both are needed and are not optional.

The Catholic and Orthodox view of salvation incorporate this forgiveness of sins with the process of sanctification and call it salvation. That is why they can say “I have been saved, I am being saved and I will be saved.” That is why they can say that salvation involves works, because that is indeed what is involved in the process of sanctification.  However they do not mean it the way a Protestant intuitively understands it.   Once we are saved, we begin a new life where we say “No” to our old way of life and “Yes” to God’s way. For as long as we draw breath, we make choices: will we become more like Christ or won’t we?  This Orthodox and Catholic view of salvation is similar to the Protestant view of Salvation and Sanctification. Both answer the question “What now?”

Protestants, Catholics and Orthodox all agree that one can not earn his/her forgiveness. We also agree that followers of Christ MUST grow and that the ultimate goal of Christianity is to become like our Savior. We just use different terms to describe it and have different traditions to help foster this growth. How far we get in that transformative process in this life is up to us and the choices we make.

At least, that’s my take!

← Questioning Our Protestant Tradition of Sola Scriptura
New Year’s Resolutions We Can All Keep! →