← Would They Have Killed Jesus if HE Preached the Same Message the Church Preaches Today?
A 300 Year Old Prayer: “Help Me Follow The Savior!” →

Keith Green: Look How Much the Christian Music Business Has Changed!

Keith Green.   His music was the soundtrack of my early Christian walk.  His lyrics inspired me not only to follow Christ more faithfully, but to go into pastoral ministry.  And that was AFTER his tragic death.  Most people who have been walking with Christ 20+ years nod their heads in agreement when his name and christian music are mentioned in the same sentence.  He was such a tremendous blessing to the body.   I don’t know anyone in the CCM scene that even remotely comes close to him.

I recently came across an album of his (while slumming at The Goodwill!)  I bought the album called “So You Wanna Go Back To Egypt…”, because it reminded me of the stark difference between today’s Christian Music business that is all about profits, and not quality lyrics, and Keith Green.   I have uploaded a picture of the album cover.  You will find it at the bottom of this post.  I have also included a live video of Keith singing “Your Love Broke Through.”  Notice the words on the bottom right…

“THIS RECORD MAY NOT BE SOLD!

This recording may be copied for private or ministry use only-Copies may not be sold at ANY price!”

Keith Green believed the gospel.  He believed that his gospel saturated “music ministry” could  impact all who were exposed to it.  He felt so strongly that  he talked his record company into letting him give the records away.  On top of that, he gave everyone the right to copy the records and hand out free tapes to anyone they were ministering to.  How did he support his family?  I don’t know.

I think this is one of the reasons God used him so much.  If you are involved in the Christian Music Ministry business, would you, could you to the same thing?  We miss you Keith!   If you loved Keith, share one or two of your favorite songs with the rest of us.  Three of mine are “Asleep in the Light” and “Song to My Parents.” “Then Your Love Broke Through>” 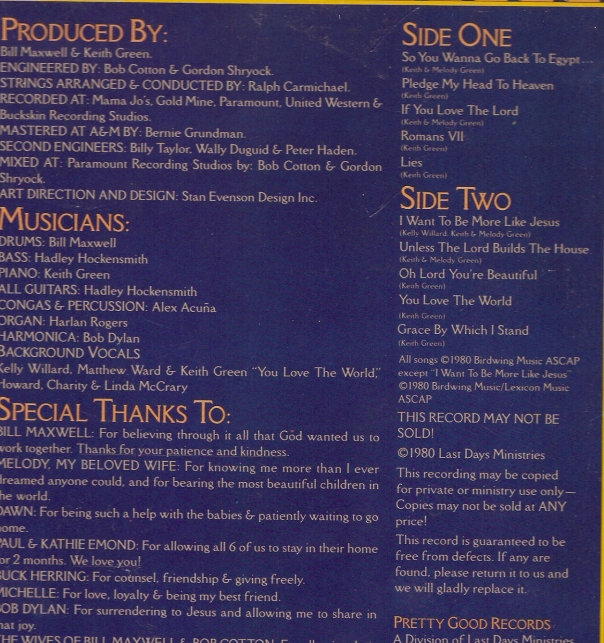 ← Would They Have Killed Jesus if HE Preached the Same Message the Church Preaches Today?
A 300 Year Old Prayer: “Help Me Follow The Savior!” →