← The Total Inability of Calvin To Explain Man’s Ability to Respond to God?
A Prayer to Jesus from the 1400’s: Be Everything to Me, Lord! →

Are We REALLY Totally Depraved? 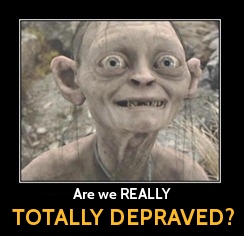 Grab the kindling wood and bring your lighters! If you continue reading this post, you may feel the urge to use them!

At least that is what I anticipate with this post on Total Depravity.

Before you light the fire, you should know up front that this post is simply me letting you in on the discussions that take place inside my head!  I’m asking you to consider some of the questions I ask myself while I think out loud about what Total Depravity means.

The Western Protestant church views T.D. this way:   Total depravity is the fallen state of human beings as a result of Adam original sin. The doctrine of total depravity asserts that people are, as a result of the fall, not inclined or even able to love God wholly with heart, mind, and strength, but rather are inclined by nature to serve their own will and desires and to reject the rule of God.

“The immediate concomitant of the first sin was the total depravity of human nature. The contagion of his sin at once spread through the entire man, leaving no part of his nature untouched, but vitiating every power and faculty of body and soul.” Louis Berkhof

This means that the fundamental nature of mankind was changed on that day. Whatever Adam’s human nature was before his sin, it became something different after the fall.  As a result, nobody can choose to follow God or do anything that pleases him in any way. We are incapable of that, unless and until we are born again.   Calvininst / Reformed theology teaches this means that unless God pours out His irresistible and regenerative grace on a person, they cannot respond to God. Armenians believe similarly, except they say this grace can be resisted and does not regenerate a person automatically.

Now the Eastern Church, countering that these views are both wrong, says our nature was only marred, not completely changed.  They make a good argument for this and if you want to interact with their actual wording, check out our post called Could the Doctrine of Total Depravity Be Totally Depraved?

The Orthodox Church teaches that no one is guilty for the actual sin that Adam and Eve committed but rather everyone inherits the consequences of this act; the foremost of this is physical death in this world. This is the reason why the original fathers of the Church over the centuries have preferred the term ancestral sin. The consequences and penalties of this ancestral act are transferred by means of natural heredity to the entire human race. Since every human is a descendant of Adam then ‘no one is free from the implications of this sin’ (which is human death).

Here’s my challenge to the Western view:  If we are indeed guilty of Adams sin and as a result our natures became totally depraved, why don’t we forfeit this regenerated nature after we accept Christ and sin again?  If another persons sin corrupted the human nature of the entire human race, then why wouldn’t my own sin corrupt my own nature totally again?

Let’s look at it another way:  I can’t come to Christ until God calls me and regenerates me because I am spiritually dead.  I am born spiritually dead because of Adams sin, not my own, though I am unquestionably a sinner.  Christ renews my nature at the new birth.  Now, I am no longer totally depraved.  Why does my nature not become totally depraved again when I, like Adam, sin?  Logic dictates that it should.

The Western view doesn’t seem to have an answer for this most basic question and  Calvin’s theological system falls apart without total depravity being true.

The Eastern view, however, does answer it nicely.  They don’t now, nor have they ever believed, that the result of The Fall was that humanity became totally depraved.  Here is their view in their own words:

The Eastern view seems to square with reality as we know it, and it lines up very well with scripture (when you don’t hold your theological frame work to be THE frame work).

Now, I readily admit that  I don’t know the answer to the question posed in this post.  I also restate that I am simply thinking out loud about this.  I am quite sure that you have your own thoughts on this and I would love to hear them!

If you found this post interesting, you may also like our post titled: The Total Inability of Calvin To Explain Man’s Ability to Respond to God?

← The Total Inability of Calvin To Explain Man’s Ability to Respond to God?
A Prayer to Jesus from the 1400’s: Be Everything to Me, Lord! →